Retired naval engineer, having served in the merchant navy as a a 'steam' engineer(6 years with an oil company) and then in the RN as a Weapon Electrical officer (18 years), finally completing my career supporting the RN as a civil servant (16 years). Married with 4 children and 3 grand children. View all posts by Robert Sebley →

As you may be aware we are very short of leaders for the Wednesday and Saturday Havant rides. For the current 3 month programme, initially only 4 people put their names down to lead rides. This not only puts pressure on those four but could ultimately threaten the rides. We are therefore looking for potential new leaders.

It might seem a big step, but it really isn’t, and to help with that, we’re arranging a workshop

The workshop is intended to introduce and discuss the various aspect of ride leadership.

All non-ride leaders who feel they could and would like to support the rides programme by becoming ride leaders are invited, as are existing active ride leaders. We plan to have a short ride to a café, where over coffee/tea/cake, we will hold the workshop, possibly on a Thursday morning in January (10th, 17th, or 24th). There would be no obligation to become a ride leader.

We need to settle a date, so please tell us what dates you can do and thereby we can maximise the numbers attending.

END_OF_DOCUMENT_TOKEN_TO_BE_REPLACED

You may already be aware of the government’s CWIS (Cycling & Walking Investment Strategy) which is now at the draft stage and open for comment. The consultation closes on 23 May, so it should be possible for all members to have their say, which can be done by using the on-line survey, using the e-mail address supplied or by normal post. You can view the documents and make your views known here.

END_OF_DOCUMENT_TOKEN_TO_BE_REPLACED

The following has recently been sent by the Transport & Implementation Team based at Havant Borough Council as their November’s update regarding the various cycle infrastructure projects in Emsworth. Click either entry to find out more about:

Havant Road A259: we have now resurfaced the former red cycle lanes, this was completed yesterday (18 Nov). We have already received positive feedback about the ride quality of the new lanes, although we have had to follow the old kerb lines which in places have sunk from their original level! Although some of the line painting was able to be done earlier today (for safety reasons we started with repainting the ‘give way’ markings across the side road junctions), we need dry weather to complete this; currently the intention is for the line painting to re-start on Saturday (weather permitting) which will involve painting the cycle lanes themselves. These will now be generally 1.5m wide, up from the original 1.1 – 1.2m; this will serve to visually narrow the road and assist in helping users to observe the 30mph speed limit. The red anti-skid (which will now only be placed in short lengths across junctions and crossings) might have to follow early next year as this requires consistently drier weather. We are now concluding work in the Barn Close area, building the new larger central island which we had to leave until now to assist with the traffic management during the resurfacing operation which took up to half the road width. We expect to broadly finish this by the end of next week. We will then fall back along the whole length of the job, clearing and tidying as we go. Additional road signs will be installed in the new year, linking through to the new route recently opened at Warblington School and so on into Havant.

Emsworth Station: the double deck 24-space cycle parking shelter installation onto the concrete slab we cast in October is expected to be completed by the end of the month. We then need to erect fencing around the shelter and it is expected to be open to the public in early December. When complete there will be a total of 48 stand spaces available at the station, compared with 18 previously. The environmental mitigation works (including a new information / interpretation board) agreed with the Emsworth Waysides Group for the northern site will be installed once the new shelter has been completed. The path to access the station subway on the north side will be widened to 2.5m and converted to ‘shared’ status once the shelter is in place.

The following projects are in various stages of design, with implementation planned during 2016.

Emsworth – Rowlands Castle cycle link: this is a new scheme to create a waymarked off road cycle friendly route between Hollybank Lane and Rowlands Castle through Hollybank Woods and Southleigh Forest. The route, which is intended to link National Cycle Network (NCN) route 2 in Emsworth with NCN22 at Rowlands Castle, involves targeted upgrades of existing paths and bridleways, signposting and route marking.

Horndean Road toucan crossing and Recreation Ground links: this is an upgrade to the existing crossing point at St James School. Design continues on this new facility; HCC has now provided the draft toucan layout so we are now able to work up the scheme in detail to link it to the wider network. This will include the signposting of a ‘quiet route’ link between Bellevue Lane and New Brighton Road via Christopher Way and Fairfield Close, providing a connection from the east to the new crossing point, as well as work within the Recreation Ground to widen the east and south side paths to create up to 3m wide shared routes. The scheme is planned to be built in the school summer holiday period in 2016.

Interbridges Link: we have reached agreement in principle with the relevant parties to implement proposals for a new east-west link between Washington Road and New Brighton Road, using land between the railway and the A27. This link will connect both into the new Station cycle parking area and the Interbridges junction, and by converting the verge on the east side of New Brighton Road (north of the Horndean Road junction) to shared status we will have achieved a quiet / off road route between Westbourne and Emsworth. Following a review of contractual arrangements and efficiency of delivery, it has been decided that this work is best done at the same time, and within the same contract, as the other work in the Recreation Ground and with the toucan crossing (i.e. summer holiday period 2016).

Havant’s Engineering Works Team are carrying out further work in North Street (currently outside Tesco), widening and improving the crossing points at the two junctions with Palmers Road. The remainder of the proposed works have been paused in case anything that comes out of the North Street Urban Design Consultation being run by Emsworth Forum conflicts with what we had planned to do.

Other Emsworth projects, including comprehensive and consistent waymarking of all the new routes through the network, will progress throughout the next year.

Please be aware that any future work may be adjusted in terms of scope and time scales.

Unfortunately due to technical difficulties my Right-to-Ride article did not appear in the latest May to July edition of the Pedal. So instead here it is: RTR Magazine Article -Apr15 V2 .

We’d like your help with a new scheme to advertise Portsmouth CTC.

We all receive the CTC magazine Cycle every 2 months after which it probably gathers dust in some corner or is recycled in the green bin. The plan is that members place their old unwanted copies of Cycle in local waiting rooms in their area so that those waiting for, say, their doctor or dentist have an opportunity to browse through the magazine and ‘discover’ CTC, and also their local Membership Group. You need to remove the Cycle Contact page so we don’t pass personal telephone addresses on to non-CTC members. Instead we’ll staple or sellotape inside the Portsmouth CTC contact details, together with some basic information, so that if a reader’s interest is provoked they can follow it up. I attach a suggested A5 Waiting Rooms Publicty Scheme Flyer for you to print off and use.

END_OF_DOCUMENT_TOKEN_TO_BE_REPLACED

Portsmouth CTC, in conjunction with Cycle Hayling, will have a stall at the 3 Churches Fete to be held from 12.00 to 16.15 on Wednesday 13th August in Hayling Park. Come along and have a go at our Turbo Challenge (how far can you pedal from a standing start in 1 minute?) - We have 2 bikes (one adult size and one childs size) so anyone can have a go! Call in to find out all about Cycle Hayling and Portsmouth CTC or just to have a chat about any aspect of cycling. Looking forward to seeing you there!

This is taking place over this weekend (26th/27th July) at the Goodwood Motor circuit. I plan to cycle over to Goodwood on Sunday (27th), and have just read that CTC members get a 50% discount on the entry price of £12. If anyone wants to join me I suggest we meet at the Havant Spring at around 09.00. Robert Sebley

I have just booked a place on the CTC Cycling Holidays Tour(1436) which will use part of this years TDF stage 1 route (the quieter roads as least) over the Yorkshire moors, from 28 June to 4 July. There are still places available with a nominal closing date of 19 April. If you fancy joining me or just want more detail, go to: http://www.cyclingholidays.org/tours/solo.php?Tour=1436

I plan to drive up on Saturday 28th June (and a could probably squeeze in at least one other bike/passenger), then drive to Harrogate on Friday 4th July to see the Stage 1 finish on Saturday, although I hope to be staying with friends for a couple of nights, so avoiding the need for an hotel. Happy to discuss when we next meet.

Portsmouth City Council is seeking comments prior to submitting an outline planning application for a major development of the temporary car park which was once the Tricorn Centre (just to the north of the Cascades).

The Portsmouth Cycle Forum have already raised issues on problems with cycling access and you may want to make your own comments at: http://www.northernquarter.info/index.html 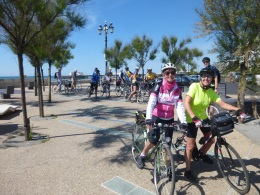