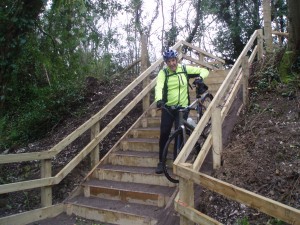 The promised access to West Dean village from the northern end of the Centurion Way extension has now been completed. It consists of steep steps with a supposed grit filled cycle gutter on one side. Descending down to the road level is then by a ramp. Trying to control a bike on the ‘gutter’ is difficult, so it is safer and easier to carry your bike. Of course, if the gate 100m to the south is open, then access to the main Midhurst road (A286) is much more straightforward. 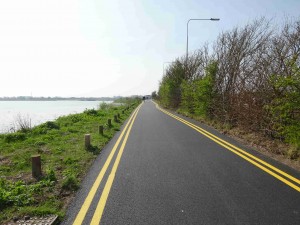 Part of NCN 22, where the Farlington marshes cycle route to the south of the A27 connects to the Eastern Road roundabout, has been improved. What was a rough broken up surface, also occasionally interrupted by parked cars, has been resurfaced with smooth tarmac and double yellow lines added to both sides. A narrow tarmac ramp from the A27 slip road traffic lights to the access road has replaced what was rough stone and mud. 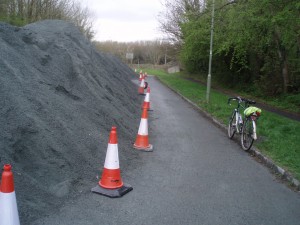 The Hampshire Highways pile of black grit with which they blocked the NCN2 cycle route just to the east of the A27 underpass before it joins the A259 (Havant Road), back in February, has now been cleared back to leave a 1.7m wide grit free passage. HCC have an expectation that all the grit should be cleared by the end of April with the complete area returned to its previous state. In the mean time contractors will be collecting the grit, probably using large vehicles, possibly spreading the grit around, and thus causing more hazardous conditions. So take care along this part of the cycle route as it is easy to skid on any loose grit, especially at night when it is difficult to see. 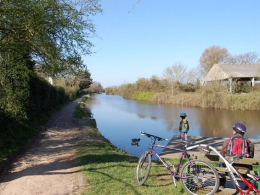