I've received this from Steve Mountain, the chap who is managing the repair work to the Billy Trail...

The Trail will be closed south of the Oysterbeds / Esso car park for up to 3 weeks to allow repairs to be undertaken to a section of the Trail damaged by storms in 2014.

P T Contractors from Southampton have been appointed to carry out the works which will see 110m of timber revetment built to protect eroding clay banks alongside the popular Trail. After the works are complete, temporary fencing which has been erected to prevent users for getting too close to the sheer drop into the Harbour can be removed. The works are funded by Hampshire County Council.

The closure is to allow heavy lorries and other plant to access the working site safely. Whilst recognising the temporary inconvenience the closure will cause, the public are asked to be patient and to respect the closure which is after all for their protection.

I've heard from various sources that the work is due to start on 16th November.

This won't, however, be the end of the erosion problems. Instead, the work will restore the protection to the same as it was before the 2014 storms. We can expect the problems to return over time. 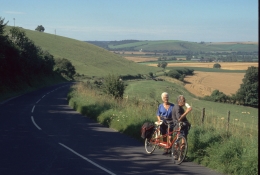