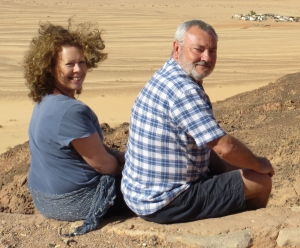 Malcolm - the "necessary" cyclist from the age of about 11. Lived in what was then a remote Sussex village (West Hoathly - East Sussex ) and a bike was his only means of transport. Then later in his 30's as a new Dad, as a way to catch the train to work in Brighton, he used an old rusty bone shaker of a bike picked up second hand for about a fiver. A mad dash in all weathers along the path next to the railway line from Ferring to Goring (West Sussex) quite literally racing the train because he was always late leaving home.

Debbie - the cyclist "that never really was". As a child my parents deemed cycling to be an extremely dangerous occupation and so bicycles were regarded much as sharp implements were to Sleeping Beauty. Needless to say forbidden things attract and by the age of 11 I was caught by my parents riding my best friend's brother's bike (he was 16 and a lot taller than me) in (I realise now) an extremely unsafe and wobbly manner on the main road through our village. Needless to say I received a double/triplicate/quadruplet/1000 times ban on riding bicycles along with a hefty curfew on going out. And so bicycles were placed on the back burner for a number of years.

And then came children. I was determined our children would cycle from an early age despite my apparent inability to stay upright on a bike. On family camping holidays we would manfully strap 5 bikes on the back of the car and the trailer tent to cycle "family railway line routes." As a result our 3 children all became competent cyclists who looked on with some amusement tinged with concern when their Mum fell off "the thing that refused to stay upright" for no apparent reason.

As the children got older Malcolm and I cycled less and less frequently but still retained a mild interest. But then came retirement. What could we do together that was outdoors based, would keep us fit, wouldn't strain the old knees too much and wouldn't be too costly . After much thought - cycling! So we both got new bikes, both hybrids, thinking we would continue to ride cycle trails probably mostly flat ones. Indeed the route from our house in Eastoke along the seafront and up the Hayling Billy Trail to the Ship and back was regarded as a good workout.

Then we saw an advert in the Hayling Islander from the Portsmouth CTC for the Cathedral Challenge - April 2016. The sentence that drew my attention was "If you cant keep up someone will wait for you"! Must be calling to us we thought. So despite the eventual target of a ride to Winchester cathedral from Havant we decided to give it our best shot.

We duly registered and took our bikes on the car to the start of our first ride from Havant. (didnt want to risk not being able to get home when the first ride was about 12 miles!) There were about 30 riders including several CTC members who were very encouraging and welcoming. We were each allocated into groups of about 5 or 6 with a leader and a back marker for each group. Marvellous! as a ride on the road was not the easiest prospect for me.

Half way into the ride Malcolm's bike chain broke. Immediately CTC support leapt into action. The remaining riders in our group were asked to ride on with a leader and 3 other CTC members stopped to help. Malcolm's bike was upended before we knew it and it was fixed 10 minutes later! Amazing!! And all with such cheeriness. Only 10 minutes more to the pub where we consumed tea and cake whilst chatting to several "would be" and experienced cyclists all of whom it seemed regarded tea and cake and a good chat as a necessary highlight of any cycle ride. Hmm - this cycling lark was looking promising! On our return back to base Malcolm and I were invited back to "Bill's" house who offered to properly repair Malcolm's bike as the unofficial CTC "bike mender." Needless to say we took him up on his kind offer. (Thank you again Bill.) And by the way I never thought I would be able to cycle 12 miles.

The cathedral cycle challenge gradually increased the length and hilliness of rides. My stamina and confidence grew. Malcolm's stamina grew. I graduated from the "Cyclist that never really was" to the "Never thought I could do it" cyclist. I progressed from having my saddle really low to a "just right" saddle height. I developed the ability to get through staggered cyclepath entrances without always having to get off. I could stay upright more often than not and my stopping and starting got better. I had never been able to use gears but gradually with CTC members' support and encouragement gear changes are now pretty much OK. I always had to get off a bike to go even slightly uphill. One of my greatest achievements was cycling up Portsdown Hill from Bedhampton albeit at a snail's pace but I did it without getting off! We cycled the Silver Cathedral Challenge ride (25 miles) and our longest ride was 35 miles including some hills. We "never thought we could do it". We will never be the fastest in the group but that's OK by us.

We have recently bought a motorhome with an impressive bike rack. An added bonus to our new found ability to cycle longer distances that are not entirely flat. We look forward to cycling in France, Spain, Italy, Scotland, Wales... and of course more rides in the company of members of Portsmouth CTC through the beautiful Hampshire and West Sussex countryside. 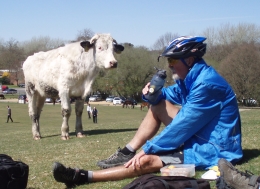