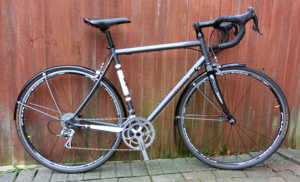 I attended Mike’s very simple and dignified funeral service yesterday. Many riders remember Mike as a most pleasant, calm and friendly ride colleague – never tired or grumpy at the route taken and encouraging riders who might have been a bit tired and struggling at the end of the ride. His bike was always in immaculate condition. He'd often be asked about his 'new' bike only to be told he'd had it for ages. 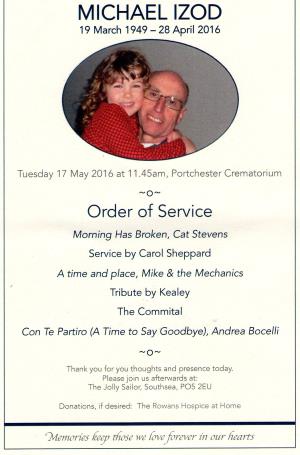 Mike joined the Navy as a Marine Engineer and served 22 years for pension, during which time he got an Open University degree in mathematics and became a school teacher up to A level standard. Unfortunately after some years he got throat cancer which affected his voice and he had to stop teaching. He then worked in the accounts department of John Lewis for some years. Some 10 years ago he contracted leukaemia but was cured and in remission until 18 months or so ago when it returned.

The photo on the service sheet was taken about 2 years ago and shows Mike with his granddaughter, Viva, then aged 4. Viva is an old Izod family name. Mike came from Huguenot stock and there are a number of Izods who were land owners in the Cotswolds, unfortunately not recently on Mike’s side of the family. A family relative told me after the funeral that he recently visited a church in one of the picture-postcard villages and saw a grave of 'Viva Izod'.

1 thought on “In memory of Mike Izod” 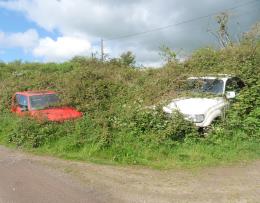