We're conducting a quiz night via Zoom. The usual rounds of questions and answers but you'll have to provide your own food and drink.

If you'd like to join us please register with Wilf by end of play Tuesday 8th December.

If you’re in the same room as someone else, it’s much better to share a device if you can, to avoid horrible audio feedback problems. Each person would count for team size calculations, so please tell him all names and how many devices.

Please also let him know if you'd like to be in the same team as one or more other members (maximum six people in a team, although co-operation over Zoom might be easier with a smaller number). That will allow Wilf to prepare for the quiz beforehand and won't waste other members' time at the beginning of the quiz.

We'll be using Zoom's 'break-out rooms' feature. Wilf and Joy will introduce each round then send each team into its own break-out room. Once there, you'll be able to chat with your team mates without anyone else overhearing. Each round's questions will appear at the foot of this page. When the prescribed time for the round expires you'll be returned automatically to the main meeting to hear the answers. Teams will self-mark.

The meeting won't be limited to 40 minutes, so there won't be a need to rejoin part-way through.

Obviously we're relying on the unquestionable integrity of Portsmouth CTC members not to use the web and to mark accurately.

To join the presentation click this link just before it starts. You will be asked for a passcode, click here to log in to see it. Andy will have published the passcode and a link that doesn't need a passcode in his 4th December update email. If you are not a PCTC member, contact Wilf or Joy via the 'Contact us about this event' link above.

Please make sure your name (or names if you join with someone else) appears correctly in the participants list: in the Zoom meeting click 'Participants' at the foot of the screen to show all participants, your entry is marked with "(me)". To change your name click 'More' and 'Rename'.

If you're unsure whether your device is up to it and whether it is configured correctly, you should check it out before the quiz: you can join a test meeting at zoom.us/test. The test asks you to speak a message which it plays back to you, testing both your microphone, playback device and video camera.

The 'break-out room' feature is relatively new. It wasn't an issue in our testing but it might be worth making sure your copy of Zoom is up-to-date:

If you get any other problems that you can't fix, try one of these:

Questions will appear here during the quiz

1 point for who said them.

1 bonus point for your own funny quote at the end of the round.

Round 4 - Cycling and local

This is a round that Joy and Wilf prepared in case there was time. It wasn't used on the night. 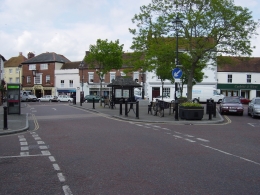