I had my first ride as a new member on Saturday and thoroughly enjoyed myself, despite a few sores here and there. I would just like to thank Andy, Paul and the rest of the group for their support during the ride and it was a pleasure to meet the other members that took part. Looking forward to the next one. Thanks 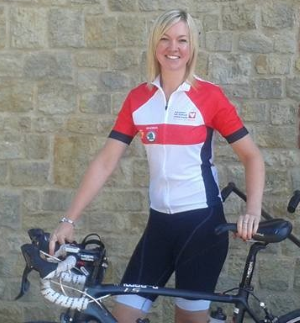 Hi my name is Sam aged 29 and until the September before last I hadn't really cycled since I was a child.

I decided that I wanted to buy a bike to cycle to the gym rather than use my car all the time. I started my search on the internet for a suitable bike; I wanted one that was going to be fairly light, easy to ride on the road and bumpy paths. After reading reviews I decided I was going to buy a hybrid. I didn't want to buy a brand new one as they are quite expensive so started looking on eBay for a good second hand one. Whilst searching I came across an advert that said they had originally bought the bike to ride London to Paris. I immediately thought "wow" that sounds like a great challenge. I looked up online and it said that with training beforehand it was possible for anyone to do... so I signed up!

I wanted to cycle with a group to gain my confidence so I looked up on the internet for local cycling groups. This is when I came across Portsmouth CTC. I noticed they ran a few cycle rides a week, one on a Wednesday and a few over the weekends. I have Wednesday's off so that was ideal.

I turned up one Wednesday morning and everyone welcomed me. I was scared that I wasn't able to do the distance as I had never ridden more than 10 miles before, but I surprised myself and managed to complete the morning ride of about 30 miles. I then started going weekly and with the support of everyone in the CTC soon gained confidence and miles. I was amazed each week I would go home so ecstatic of the distance I had managed to do each time. In April last year I bought a road bike as realised that I was only using the bike for road and was told it would help me for my challenge ahead. Over time my legs got stronger and one of the cycling members said I should go up into the faster group. Again I was unsure but after trying it out I realised I could do it! 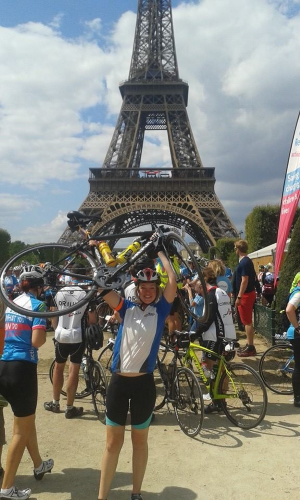 My cycle trip to Paris soon came round in July 2015 - I managed to cycle 316 miles from London to Paris. It was hard work, with some very challenging hills and long distances to ride each day but after 4 days I eventually found my self underneath the Eiffel tower. Wow, such an experience and to think that a year before hand I hadn't ridden a bike in many years. It was amazing and I would like to thank the CTC for all their encouragement and support they gave me.

If you think you can't do it, think again. Cycling is not only great exercise but you get to see the country in a different way and you'll surprise yourself at just how far you can go.

How has being a member of CTC helped me?

A part of my working life has been with Sussex Police as a traffic officer and the last ten years, before retiring, I was involved in close protection security, this required the highest levels of fitness, so I started speed walking for 6-8 miles, progressed this and became a Nordic walking instructor.

Unfortunately, a few years ago I developed a serious blood disorder and was put on tablet form chemotherapy that I still take to this day. I retired at 65 and then developed a spinal disorder that over the past five years has deteriorated quite significantly and recently causing me to loose the feeling in both legs.

Two years ago I had to stop my Nordic walking due to my medical conditions and became concerned that my general fitness would go downhill, so I spoke at length with my Consultants who suggested I take up riding a bike, as this would not be load-bearing on my spine and would give me the exercise I needed.

In August 2014 I was recommended by a friend to join the CTC, and what a change this has made to my life. In September of that year I did the 30 mile Ruby run for the "Rowans Hospice", something I would never have thought I could do and over this period my fitness levels have gone up, my blood pressure has decreased and I now ride up hills that I would have had to walk!

An even bigger bonus with CTC, is I have met a really nice group of people to enjoy a Wednesday ride with and the most important factor is they all genuinely care, I'm never made to feel bad or I'm holding up the group if my health takes a downward turn due to pain or dehydration. No, there is always someone who will turn back and check to see I'm OK! I never feel concerned for my safety.

To be a member of CTC you don’t have to be a dedicated racing cyclist, they cater for everyone, as my case has proved and I have gone from riding 16 miles locally, to riding out to Arundel or Winchester some 68 miles return and I'm 70 with health issues, what more of a recommendation do you need.

I just thought I would tell you about the new cycle track from the Billy Line to Warblington school.

It is a nice smooth surface with only a little bit missing at the moment. As yet it has no cycle track markings and there is no dropped curb at the school end (which might be dangerous) so you have to ride on the footpath if going north and meld into the traffic as you cross the rail track. If going south you still have to use the footpath to meet up with the cycle track to Emsworth which is across the road from the school. Maybe there will be some markings when they have completely finished it.

If the rail barrier is down when getting to the north end of the Billy Line it may be quicker to use this cycle lane as you only have to wait for one set of trains at Warblington and not two as you have to at New Lane. 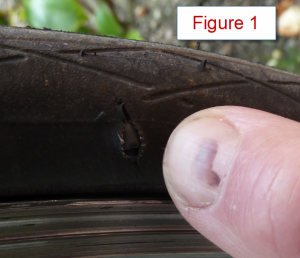 A tyre boot is a piece of material used in the temporary repair of damage to a bicycle tyre such as a cut to the tyre sidewall. Figure 1 shows a typical sidewall cut. You can see there is a danger that the inner tube will pop through the cut and burst. A tyre boot temporarily covers the cut to prevent the (repaired) inner tube from further damage. The method described here is not suitable for tubeless tyres.

There are a variety of methods and materials that can be used and the following description is but one of them and successfully used by the author.

The material needs to be strong and thin without any sharp edges – strong enough to prevent the inner tube from poking through the cut whilst thin enough to 'wedge' unobtrusively in place, and of course have no sharp or irregular edges to damage the inner tube. Candidates for this include a piece of inner tube cut from a spare, a piece of leather, a £5 note/$1 bill or similar, and so on. In this article I use a piece cut from a toothpaste tube. The tube is plastic on the outer with a thin metallised covering on the inside. Figure 2 shows three pieces cut from one toothpaste tube. 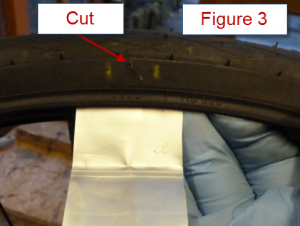 First, replace or repair the punctured inner tube, put a small amount of air in the inner tube and fit back under the tyre leaving one side of the tyre 'unhooked' from the wheel. Take one of the tyre boot strips and place it between the inner tube and the damaged part of the tyre wall, leaving the excess material protruding for the moment. Figure 3 shows this: note the yellow marks on the tyre which are used simply to show the location of the cut. 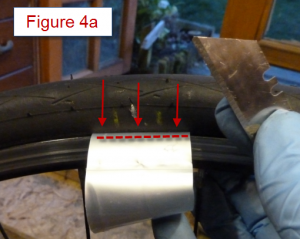 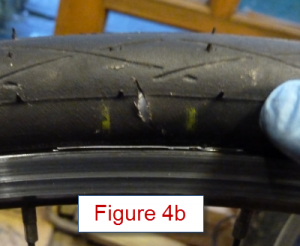 Finally, the tyre boot, wrapped around a hobby knife blade weighs about 2gms, costs pennies and fits neatly into the average puncture repair box. To include a tyre boot 'kit' into your repair outfit may well save you or a cycling buddy a long walk home!

Last Monday I attended the launch meeting of the Portsmouth Cycling Forum cycling strategy for Portsmouth which was well attended by City Counsellors and senior Officers as well as Representatives of British Cycling and other interested parties. Jon Spencer as chairman of the PCF made the launch presentation and emphasised that it had been formulated by the PFC in response to a challenge by Donna Jones the leader of the Council and covered five key action areas: Safety; Transport; Equality; Leisure; and Planning.

You can see the strategy document here.

This is obviously a very important forward move for Cycling in Portsmouth and Donna Jones has responded very favourably and wishes to progress the city policies to incorporate the strategy and will be holing further meetings to this end with John in the near future.

The next meeting of the Portsmouth Cycling Forum, at which the Strategy will be presented, is on the same day as our AGM 13th November. Even so, it would be good if Portsmouth were well represented. 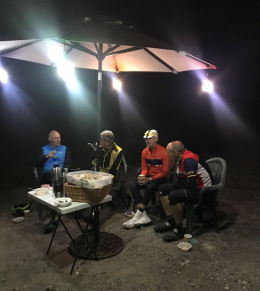