How has being a member of CTC helped me?

A part of my working life has been with Sussex Police as a traffic officer and the last ten years, before retiring, I was involved in close protection security, this required the highest levels of fitness, so I started speed walking for 6-8 miles, progressed this and became a Nordic walking instructor.

Unfortunately, a few years ago I developed a serious blood disorder and was put on tablet form chemotherapy that I still take to this day. I retired at 65 and then developed a spinal disorder that over the past five years has deteriorated quite significantly and recently causing me to loose the feeling in both legs.

Two years ago I had to stop my Nordic walking due to my medical conditions and became concerned that my general fitness would go downhill, so I spoke at length with my Consultants who suggested I take up riding a bike, as this would not be load-bearing on my spine and would give me the exercise I needed.

In August 2014 I was recommended by a friend to join the CTC, and what a change this has made to my life. In September of that year I did the 30 mile Ruby run for the "Rowans Hospice", something I would never have thought I could do and over this period my fitness levels have gone up, my blood pressure has decreased and I now ride up hills that I would have had to walk!

An even bigger bonus with CTC, is I have met a really nice group of people to enjoy a Wednesday ride with and the most important factor is they all genuinely care, I'm never made to feel bad or I'm holding up the group if my health takes a downward turn due to pain or dehydration. No, there is always someone who will turn back and check to see I'm OK! I never feel concerned for my safety.

To be a member of CTC you don’t have to be a dedicated racing cyclist, they cater for everyone, as my case has proved and I have gone from riding 16 miles locally, to riding out to Arundel or Winchester some 68 miles return and I'm 70 with health issues, what more of a recommendation do you need. 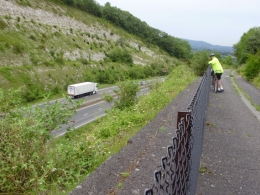