Last Monday I attended the launch meeting of the Portsmouth Cycling Forum cycling strategy for Portsmouth which was well attended by City Counsellors and senior Officers as well as Representatives of British Cycling and other interested parties. Jon Spencer as chairman of the PCF made the launch presentation and emphasised that it had been formulated by the PFC in response to a challenge by Donna Jones the leader of the Council and covered five key action areas: Safety; Transport; Equality; Leisure; and Planning.

You can see the strategy document here.

This is obviously a very important forward move for Cycling in Portsmouth and Donna Jones has responded very favourably and wishes to progress the city policies to incorporate the strategy and will be holing further meetings to this end with John in the near future.

The next meeting of the Portsmouth Cycling Forum, at which the Strategy will be presented, is on the same day as our AGM 13th November. Even so, it would be good if Portsmouth were well represented. 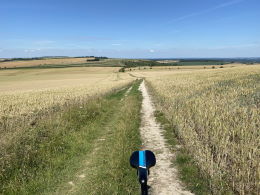