Portsea creek is that part of the sea that goes around the north of Portsmouth island from Eastern Road to Hilsea roundabout. It's between the Hilsea lines and the M27 motorway.

They have just completed the raising of the embankment on the south side of the creek. So this is now cycleable from the south end of Eastern Road bridge to the railway bridge going west. So this can now be used to go alongside the creek even when the tide is in (you could not get under the railway bridge on the north side of the creek when the tide was in). Once under the bridge you can then regain the northern side by crossing over by the foot bridge ( it's a smoother route than staying on the south side). So we now have an "any time" link to the Broadmarsh cycle track.

The surface is smooth at the moment with a sandy clay-like finish but that will deteriorate if horses or rabbits get at it.

It is wide enough for trikes but they will have problems if they want to cross over the foot bridge as it has a gate at the south end. They would have to continue along the south side to get to Hilsea and then go over the motorway to Tudor Crescent as there is another gate between that point and the foot bridge that crosses over the bus station at Hilsea. 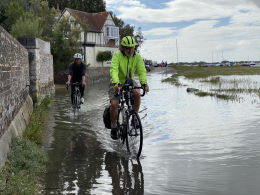