The bike I ride through the warmer months is a road/race bike with drop handlebars. You can see a picture of it on the right.

The bars came wrapped in white bar tape. That's a pretty daft idea because they get grubby really quickly. You can see they are pretty bad in the picture, but they got worse.

I'd not replaced bar tape before but, having read a few articles on the web, I decided I could do it myself. This article describes how I got on.

I started by buying the replacement tape. The one I settled on was Easton cork bar tape from Wiggle (having remembered to go via the CTC shop link to claim my platinum discount). This tape had good reviews, including several from other first-timers. I found it easy to use. You could adjust it as you went along, and it was sufficiently tough that you could pull it tight without fear of breaking it. I went for black - I wasn't going to use white again!

The tape came with bar plugs and two pieces to go behind the brake levers - see below. No instructions, though.

Removing the old bar tape was easy enough. The cables were already taped to the bars at strategic points so I didn't have to do that.

I found the following article and video particularly useful when it came to replacing the tape...

When it came to it, I was a little nervous. It's the kind of thing that looks easy to do, but I thought it might be more difficult than it looked! As it happens, it wasn't too bad at all. It was a great relief, though, when I finished.

I was concerned that I'd run out of bar tape, but there was plenty left over. As several of the Wiggle reviewers found, the tape Easton supplied to seal the ends of the bar tape was a little weedy, so I used ordinary insulating tape instead. I don't think the result is at all bad. It's survived several rides. I could certainly do better second time around, but I'm not ashamed to take the bike out!

If your tape needs replacing, why not give it a go? 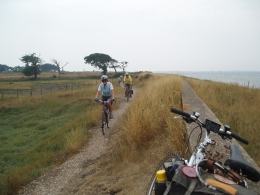