Gilbert brings our attention to the following letter to the Chichester Observer explaining the logic behind the Centurion Way extension which ends in a cul-de-sac...

We are pleased to hear that people are enjoying the recent extension to the Centurion Way between Lavant and West Dean.

We appreciate that there is some frustration that it doesn't yet offer an off-road route into West Dean and thought it would be helpful to clarify the current status and next steps as part of our long-term ambition to bring the route all the way to Midhurst. The recent path extension which opened in December was made possible thanks to funding from the Department for Transport. As this funding was time limited we considered it best to carry out agreed construction works at once even though this would result in a dead end as we had not yet identified a means of providing access to the village.

We have been working in partnership with landowners and the local community to resolve this issue and are confident that we will find an acceptable solution in the near future.

In the meantime we've installed information panels and fingerposts at Binderton to alert users that access to the village remains via the route adjacent to the A286.

We are asking that people using the path respect the privacy of adjacent landowners. Trespassing on their land is not only unlawful but could jeopardise ongoing discussions and erode goodwill as we try to find a long-term solution.

We will continue to develop the Centurion Way as and when funding becomes available as part of our vision to develop a network of core shared paths across the National Park.

We are grateful for the support of the Edward James Foundation, owners of the West Dean Estate, for their continued support and look forward to working with landowners, tenants and communities to reach a a solution. For further information about the Centurion Way project, please contact info@southdowns.gov.uk

1 thought on “Rationale for the Centurion Way extension” 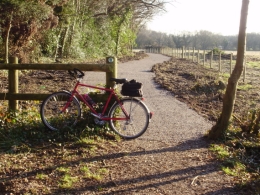