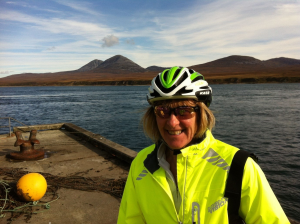 I have always had a bicycle – cycled to school, cycled to college, to the shops, etc, etc. However, I had never really cycled any challenging distances or more challenging rides. When I met my husband we started to cycle together using mountain bikes both on and off road. Initially this was quite amusing (for me anyway) for all the wrong reasons – Bill had not been on a bike since he was a child and so was not that stable or confident initially. Several times I would turn round to see him upturned in to the mud. Fortunately never hurt apart from his pride!

We started doing more challenging rides and, when Bill moved to Hayling, we decided to cycle the South Downs Way over 4 days. We practised and, finally, we were off. What a trip we LOVED it! 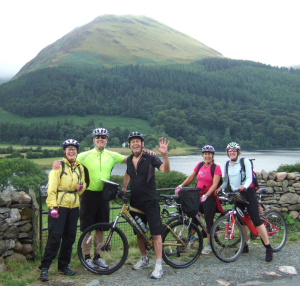 We then saw the coast to coast ride (St Bees to Tynemouth) we thought that could be our next trip. We managed to persuade 4 other friends to join us. We used a travel company to book accommodation and bags were transported - maximum of 30 miles a day. We all succeeded and loved it. We had lots of coffee, cake and food stops! All of us have continued to cycle to a greater or lesser degree!

Next - My best mate and I had always had on a bucket list – cycling Lands End to John O’Groats. When I moved down to Hayling Island in August 2014 this seemed to be our opportunity as I would be working less and our dates could work – but how to do it!? Longer distances and stamina would be required and a decision about whether we could carry our own stuff. A trip to the Inner Hebrides with friends proved we could carry everything but we were still only doing 30 miles max a day.

I had spotted a Portsmouth CTC flyer in the local bike shop. I contacted the ride leader for that week via the website and asked loads of questions which he patiently answered! Finally with some fear and trepidation I went along on the Wednesday with my newish hybrid bike. I wasn't sure whether I would just go to coffee or the whole ride as I had only completed a maximum of 30 miles before. I completed the whole ride due to the positive encouragement and kindness of other riders. I continued attending whenever I could and even managed 70 miles including my cycle on and off the Island to the meeting point. I certainly would not have thought I could do this without being with the CTC. 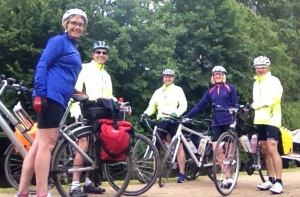 I shared with one of the CTC riders my intention to cycle LeJog as it is called and the next week he kindly lent me a book about the ride! So that was it – had to be done!? Initially it was just me and my friend but we ended up being 5 carrying all our belongings with B&B’s booked on route. Finally July 2015 we set off. An amazing adventure over 3 weeks which was incredible and made even better by the raising of money for the Alzheimer Society. I really do not think we could have done it without the top tips I was given about on-going maintenance of the bikes by CTC members and the increase in distances that I did on Wednesdays.

We then signed up for another different sort of adventure: The Hayling Charity Cycle ride to Le Mans and back last year. Can't imagine not cycling now – I'd never have thought that I would consider cycling to Compton for coffee and think nothing of it. Step by step – or rather pedal? Amazing – thanks CTC! 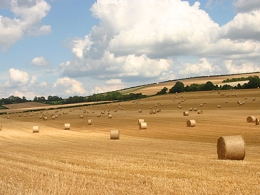