I have three rear lights on different bikes, all Cateye:

TL-LD 650 (about £25 and also known as the TL Rapid 5) has five LEDs. The centre LED is so bright that when set to continuous only the centre and two outer are lit; all are used in flashing mode and in pulse mode the centre LED is dimmed to avoid dazzling following cyclists.

TL-LD 1100 (about £32) has ten LEDs in two rows of five of which three face to the rear and two are angled towards the side.

All can be switched to steady and flashing and maybe several other modes I haven’t discovered.

I can’t compare light output, lumens, candela because I don’t understand things like that, but the 1100 is the one about which I get most comments on how bright it is.

But my intention is not to write just about the lights but to consider how to fit them. Manufacturers seem to be under the impression that all cyclists want to attach their rear light to the seat post and they only supply a bracket which will clamp around a seat post. That is no good to me because I have a saddlebag.

I have two solutions. The first is on my Flying Gate. Trevor Jarvis, who built the frame, also made the detachable pannier rack and his contribution to solving the rear light problem is to braze half of a hinge to the rack. This of course has two convenient holes in it. All that is needed now is to cut a piece of L-shaped steel or aluminium and drill the necessary holes, two to attach it to the half hinge and a third on the return through which is bolted a Cateye bracket (available from many sources for a couple of quid).

The second is on my Hetchins on which I have a Blackburn pannier rack. I cut a piece of handlebar (I think it was, but any suitable tube will do), cut two slots in it to fit snugly over the rack tubing and drilled a hole through it. Others will no doubt be able to do this more neatly than I did.

This bit of tube slides over the pannier rack tubing and is held secure by a bolt through the holes. I can now use the bracket supplied with the light to attach the light to this piece of tube.

Ever since I bought my Specialised cross bike with cable disk brakes, I've been on the look-out for a good way to adjust them so the rotors don't touch the pads and - at the same time - not having too much play in the brake levers.

This video shows a fairly simple method.  I suspect it can be improved on, but it looks like a good starting point...

There are web sites allow you to record details of your bike so that:

Police forces usually rely on a single site.  Hampshire partners with Immobilise.com.  The other main site is BikeRegister.  Both sites offer a range of services:

It makes sense to register with both sites.  If you decide to use one of the paid-for services, however, it's not worth buying the same service from both sites.

While on the subject of the internet, you need to take care not to provide a thief with clues of where to find an expensive bike.  In particular, if you participate in a cycling social networking site like strava.com, make sure you do not record routes that accurately describe your home location.

You may already know there are several CTC members on the committee of the Cycle Hayling campaign group.  Cycle Hayling exists to promote cycling on Hayling Island and to help bring about changes to the cycling infrastructure.

You can read more about the Cycle Hayling projects here.

If you'd like to support Cycle Hayling's activities - you don't have to live on Hayling - then please register your support.  In return, we'll send you an occasional newsletter keeping you up-to-date with what's happening.

The bike I ride through the warmer months is a road/race bike with drop handlebars.  You can see a picture of it on the right.

The bars came wrapped in white bar tape.  That's a pretty daft idea because they get grubby really quickly.  You can see they are pretty bad in the picture, but they got worse.

I'd not replaced bar tape before but, having read a few articles on the web, I decided I could do it myself.  This article describes how I got on.

END_OF_DOCUMENT_TOKEN_TO_BE_REPLACED 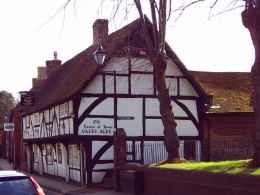